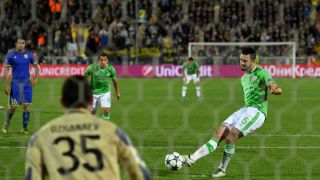 PSV Eindhoven's poor run against Russian sides continued as they were held to a frustrating 2-2 draw by Rostov in the Champions League.

Phillip Cocu's team came into Wednesday's encounter at Olimp-2 Stadium having failed to claim a victory from their previous four matches on Russian soil in European competition.

And the Eredivisie champions looked unlikely to buck that trend when they fell behind to Dmitry Poloz's early strike, though they pulled level courtesy of Davy Propper's deflected shot.

Rostov built on the lively opening, Poloz again on target as Ivan Danilyants' side restored their advantage, only for Luuk de Jong to cancel it out in first-half stoppage time.

PSV were much improved in the second half, Propper seeing a penalty saved by Soslan Dzhanaev before being denied by the woodwork, but Rostov held firm to secure a vital point in Group D.

In the first meeting between the sides, it was Rostov who opened the scoring eight minutes in, Poloz slotting home the club's first Champions League group-stage goal at the culmination of a well-worked move.

Rostov's celebrations were short-lived though as PSV – on their first meaningful venture forward – restored parity courtesy of Propper's strike, which took a wicked deflection off Vladimir Granat.

Sardar Azmoun went close as the hosts searched for an immediate response, the forward engineering some room in the box before driving a venomous effort over the crossbar.

Azmoun continued to threaten, and the 21-year-old was the architect as Rostov retook the lead in the 37th minute, his header teeing up Poloz, who duly doubled his tally with a thumping finish into the bottom-left corner.

PSV again responded well to Rostov going ahead – Propper turning provider as he teed up Luciano Narsingh – but the winger was flagged offside before he slid home the finish.

However, Cocu's side did have another leveller on the stroke of half-time, De Jong heading in from point-blank range after Santiago Arias' shot had rattled the crossbar.

PSV were gifted the chance to take the lead for the first time 55 minutes in, referee Clement Turpin harshly deeming that Cesar Navas had brought down De Jong in Rostov's area.

Propper, in search of his second, stepped up to take the resulting penalty, but the Dutchman could not find the target this time round – Dzhanaev pulling off a superb stop.

Matters were made worse for the visitors just after the hour-mark, midfielder Jorrit Hendrix having to be helped off the pitch after a heavy collision with Poloz at the other end.

Cocu's men finally had a foothold in proceedings, though, and Propper was desperately unlucky not to double his goal haul when his blistering attempt clattered off the underside of the crossbar and into the hands of Dzhanaev.

Rostov's goalkeeper was the hosts' hero again late on, reacting instinctively to parry away Steven Bergwijn's strike to force PSV, who lost to Atletico Madrid on matchday one and face Bayern Munich next, to settle for a share of the spoils.