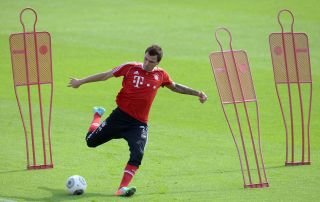 With Borussia Dortmund's Robert Lewandowski set to join the German champions at the end of the season, reports had linked the Croatia international with a move away from Bayern.

Arsenal had been cited as one of Mandzukic's potential destinations, but Rummenigge has insisted negotiations over an extension to his deal that expires in 2016 will take place.

"We will keep Mandzukic and will try to extend his contract," he told Bild.

"I don't have the feeling that he'd be averse to that."

Team-mate Arjen Robben will see his contract expire next year, although Rummenigge is also confident in extending the Netherlands international's stay in Bavaria.

"I'm always in contact with him and his father and soon we will meet in order to be more specific," he continued.

"We are very happy, and he feels comfortable. I have a good feeling."