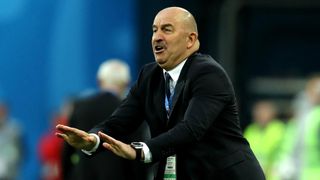 Russia head coach Stanislav Cherchesov has been rewarded with a two-year contract extension for masterminding an impressive run to the World Cup quarter-finals.

The agreement means the 54-year-old will remain at the helm until Euro 2020 with the Russian Football Union retaining the option of a further two-year extension.

Having entered as the worst-ranked team, the host nation defied expectations to reach the World Cup knockout rounds with comprehensive group stage wins over Saudi Arabia and Egypt.

They then stunned 2010 champions Spain in a tense penalty shootout in the last 16, before losing in the same manner to eventual finalists Croatia.

Cherchesov was congratulated by Russian president Vladimir Putin and is now looking forward to building on the breakthrough showing.

"I am glad that we will continue to work with the Russian team," he said.

"In terms of team results the bar is raised high enough. I would like to continue further in the same spirit.

"We understand the full measure of our responsibility, we will do our work with dignity."

Cherchesov's accomplishments led to his inclusion on an 11-man shortlist for the Best FIFA Men's Coach award for 2018.

A former international goalkeeper, he managed the likes of Spartak Moscow and Legia Warsaw before taking his country's top job in August 2016.