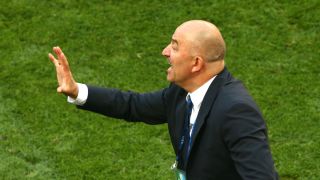 Russia midfielder Aleksandr Erokhin made World Cup history when he became the first player to enter the field as the fourth substitute in extra-time against Spain.

With the two teams tied at 1-1 and seven minutes of extra-time played, Russia coach Stanislav Cherchesov opted to take advantage of FIFA's new ruling, which allows a fourth substitution to be made in the extra 30 minutes.

Erokhin, who plays his club football for Zenit, replaced Daler Kuzyaev as Russia looked for a way to turn the tide of attacks from Fernando Hierro's men.

4 - Russia are the first country in history with 4 substitutions in a single match. Changes. July 1, 2018