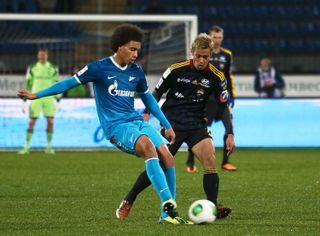 Goals in the opening 45 minutes from Roman Shirokov and Hulk guaranteed the three points for Luciano Spalletti's men, as they made it seven league wins in a row and now sit five points clear at the top of the division.

Nicolas Lombaerts said afterwards that the win represented revenge, after CSKA beat Zenit 3-0 in the Russian Super Cup, while Hulk preferred to keep calm when it comes to talking about his side's title chances.

"Now our gap is quite large, but it's too early to say that we're a one hundred per cent favourite in the league," he told the club's official website.

"There are still a lot of games. This was only the 13th round. We must be humble and keep our feet on the ground. If that happens, then we can become champions."

Lokomotiv Moscow kept up their impressive form to ensure they sit within five points of the top after a 4-0 win over Amkar Perm on Monday.

Yuri Movsisyan got the only goal as Anzhi's winless league wait moved to 13 games.

They are now two points adrift at the foot of the table after Tom Tomsk were dispatched 4-0 by Krasnodar, while fellow strugglers Terek Grozny and Ural drew 1-1.

Rubin Kazan's inconsistent form continued, as they were beaten 2-1 by Volga, with nine-man Kuban Krasnodar outfit beaten 3-1 by Dinamo Moscow.

Andriy Voronin, Vladimir Granat and Kevin Kuranyi put the hosts 3-1 up after Ibrahima Balde's opener, before Arsen Khubulov and David Tsoraev were dismissed in the final 22 minutes.

Elsewhere, Krylya Sovetov came from behind to beat Rostov 2-1 thanks to goals in the last 12 minutes from Luis Caballero and Aleksandr Eliseev.