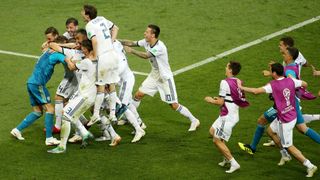 They were tipped for an embarrassing group-stage exit on home soil but Russia have defied the odds to reach the quarter-finals of the 2018 World Cup.

The lowest ranked team in the showpiece tournament, there were widespread fears Russia would bow out with barely a whimper, having failed to win a match at Euro 2016 and the 2014 World Cup.

Russia also failed to impress during last year's Confederations Cup, sparking serious concerns about the quality of the national team.

"We won't have new players tomorrow. This is our main team," then-deputy prime minister and current Russian Football Union president Vitaly Mutko said at the time of the warm-up tournament via R-Sport news agency. "Aliens aren't going to fly in to play for Russia."

Russia were amid a seven-match winless run prior to their World Cup opener against Saudi Arabia.

However, thanks to head coach Stanislav Cherchesov, in-demand midfielder Aleksandr Golovin, Artem Dzyuba and the heroics of goalkeeper Igor Akinfeev, the national team have united and captivated the country.

Now, after taking down Spain in the last 16, Russia stand on the cusp of something special as they plot Croatia's downfall in Sochi on Saturday.

We take a look at the other hosts to have exceeded expectations.

Many expected South Korea just to make up the numbers but the co-hosts produced one of the most remarkable runs in World Cup history. Led by Dutch icon Guus Hiddink, South Korea made it all the way to the semi-finals before falling to runners-up Germany. Voted the most entertaining team of the tournament, a youthful Park Ji-sung and Ahn Jung-hwan helped the host nation top their group ahead of the United States, Portugal and Poland. South Korea then completed a sensational comeback to upstage Italy in the last 16 – Seoul Ki-hyeon's 88th-minute equaliser forcing extra time, where they achieved the impossible three minutes from the end. Hiddink's giant-killers backed that up against Spain as they eventually finished fourth.

The high point of England's sporting achievements, the Three Lions finally got their hands on the coveted Jules Rimet Trophy for the first and only time 52 years ago. Chosen to stage the event, England reigned supreme by trumping West Germany 4-2 after extra time in the final courtesy of Geoff Hurst's hat-trick at Wembley. England finished ahead of two-time winners Uruguay in the group stage, before dispatching Argentina and high-flying Portugal en route to winning the tournament.

Argentina became the fifth host nation to capture the World Cup after topping the Netherlands 3-1 in the decider. Amid political uncertainty in the country, Argentina denied South American rivals Brazil a place in the final thanks to their 6-0 rout of Peru – having needed a 4-0 victory to top the standings. In the main event, Mario Kempes netted twice as Argentina consigned the Netherlands – who were without star Johan Cruyff after he decided not to play the tournament – to back-to-back runners-up World Cup medals.

From football to rugby union. This World Cup unified a divided nation. The separation between white and black was clear to see in South Africa, until the Springboks' 1995 triumph on home soil brought the country together, much to the joy of Nelson Mandela. South Africa only returned to the international stage in 1992, while just a handful of Tests were played prior to the tournament. The Springboks upset defending champions Australia in the opener as they finished top of their pool. South Africa thrashed Western Samoa in the quarter-finals before overcoming France in a rain-delayed last-four clash, and Mandela's dream for South Africa was complete when the Springboks – against all odds – took down Jonah Lomu and the star-studded All Blacks in Johannesburg.

He might not have reached the final, but Jimmy Connors' run at the 1991 US Open lives long in the memory. At the start of the tournament, the eight-time major winner was ranked 174th in the world after his storied career declined – in 1990 he played only three matches due to a wrist injury. But the American icon returned to Flushing Meadows eight years after his previous grand slam triumph and showed age is just a number in New York. He produced a rousing comeback against Patrick McEnroe in the first round, rallying from two sets down to advance. Connors' hot streak continued beyond his 39th birthday and through to the semi-finals, where he was stopped in his tracks by 1991 French Open winner and countryman Jim Courier.