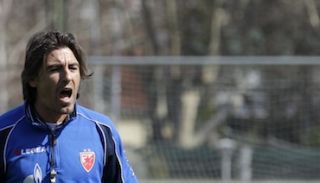 "This is a sad day for me because I have decided to leave the club and this not what I wanted when I took over at Red Star," the former Portugal forward told reporters at Red Star's Marakana stadium.

"I came here to win trophies but that it is an impossible task in the present circumstances. I gave the board enough time to sort things out when I left to Portugal on vacation but they have failed to make enough progress, not least in boosting the squad.

"I have not shut the door for the future and I said that to the people in charge, but I also told them that Red Star first have to win back some of the respect they enjoyed in Europe in 1991," he said.

Red Star won their last league title in 2007 and have since seen bitter city foes Partizan clinch six in a row. They have also failed to survive the winter break in European competition since 1992.

Sa Pinto briefly rekindled hopes of ending the drought when Red Star won his first eight league games in charge to trim the champions' 11-point advantage to just two, but his challenge effectively ended in a 1-0 derby defeat at Partizan.

Having failed to produce talent remotely close to former captains Nemanja Vidic and Dejan Stankovic in the last decade, Red Star's debts soared to in excess of 50 million euros, a large amount by the standards of Serbia's flagging economy and ramshackle football infrastructure.

Several senior players have hinted they are ready to leave over unpaid wages while the board, led by president Dragan Dzajic, said this month that those who stay would have to show "restraint and patience" for the club to find some money.