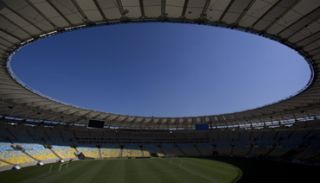 The Rio de Janeiro state government said, however, that it has appealed against the decision by lower court judge Adriana Costa dos Santos and will provide documents showing that safety tests were duly carried out.

"All the safety requirements for the England-Brazil friendly were fulfilled but were not handed in due to a bureaucratic lapse," the Rio government said in a statement.

With the England team already in Rio de Janeiro, the ruling is expected to be overturned in time for Sunday's game. The judge's decision made clear that the injunction would be lifted as soon as the safety paperwork was presented.

A Brazilian Football Federation spokesman said the tests had been carried out and the documents would show the judge that her decision had no grounds.

The stadium, regarded as the spiritual home of Brazilian football, was built for the 1950 World Cup and was supposed to be ready for its re-inauguration in December, six months ahead of the Confederations Cup in June.

It did not, however, re-open until April 27.

Maracana's $500-million overhaul program was plagued by delays and burgeoning costs and will only manage to hold one professional test match before the June 15-30 Confederations Cup.

The stadium is due to host seven matches during the 2014 World Cup, including the final.