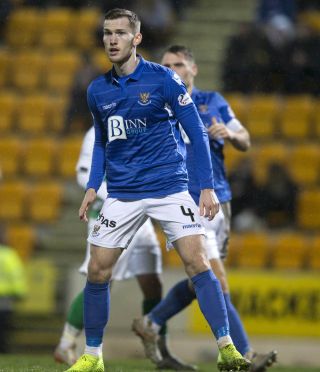 Jamie McCart admits Wednesday’s trip to Pittodrie underlines why he wanted to move to St Johnstone.

The defender sealed a January switch from Inverness after signing a pre-contract with the Perth club.

The 22-year-old left a Caley Thistle team fighting for promotion but realistically through the play-offs with Dundee United well out in front in the Ladbrokes Championship.

And McCart felt he had to make the move as quickly as possible.

The centre-back, who has faced Celtic and Hearts in the past week and is now set to pit his wits against Aberdeen, said: “That’s why you want to play in the Premiership, going to places like Pittodrie, better atmosphere, bigger crowds, better standard of football.

“As soon as St Johnstone came in for me, me and my agent were keen to come. Obviously Inverness were brilliant for me but I couldn’t turn down the chance for Premiership football.

“There’s a lot of ifs and buts in football, anything can happen. Inverness have a real, strong chance of getting promotion. It’s difficult in the play-offs with the amount of games you need to play, it doesn’t make it easy. But I think it was the right time for me.

“It gives you a big boost that the manager wanted to sign me as soon as possible.”