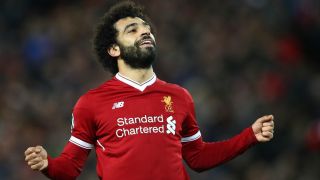 Liverpool have welcomed back Mohamed Salah and Daniel Sturridge to training ahead of their clash with Premier League leaders Manchester City.

Club-record signing Salah has missed his side's last two matches due to a groin problem and Sturridge has been sidelined since the Champions League win over Spartak Moscow on December 6.

The forwards took part in the session under manager Jurgen Klopp on Wednesday, with Liverpool stepping up their preparations for the visit of Pep Guardiola's side to Anfield on Sunday.

The news is a timely boost for Liverpool, who saw Philippe Coutinho depart for Barcelona at the weekend for a reported fee of €160million.

Salah has scored 17 goals in 21 league games since his move from Roma last year, while Sturridge has managed two goals from only five starts.