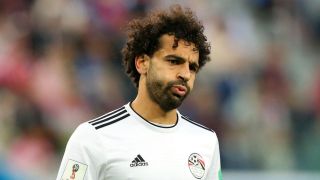 Mohamed Salah will not be leaving the World Cup early despite his team's elimination, according to Egyptian Football Association (EFA) president Hany Abo Rida.

Egypt lost their opening two matches in Group A, 1-0 to Uruguay and 3-1 to Russia respectively, leaving them unable to progress to the round of 16.

The team qualified convincingly to secure their first appearance on the big stage since 1990, only for star player Salah to suffer a shoulder injury in Liverpool's Champions League final loss to Real Madrid last month.

He missed Egypt's opening defeat and returned to score a consolation penalty against the hosts, but has been forced to deny rumours of a rift within the national team camp.

And Abo Rida has also rejected suggestions the 26-year-old could depart the tournament before the dead rubber against Saudi Arabia, who have also been eliminated.

"I have no idea about Liverpool," the EFA boss told reporters.

"He is happy to mingle with his team-mates and he was shocked by what the press has written about him and denied it all on social media.

"We're all perplexed by what has been published and have no idea where it came from."