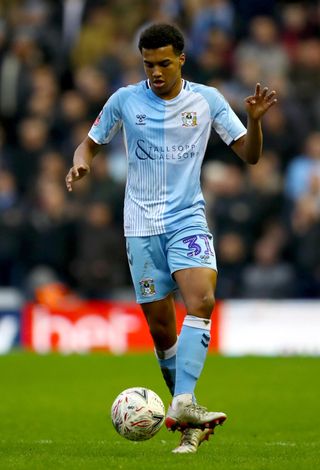 Norwich have signed the “very interesting talent” of left-back Sam McCallum from Sky Bet League One Coventry for an undisclosed fee.

Although McCallum has signed a four-and-a-half-year contract with the Canaries, the 19-year-old has immediately been loaned back to the Sky Blues where he will remain until the end of the season.

A product of Jamie Vardy’s V9 Academy, McCallum has been a shining light of Coventry’s push for promotion this season, scoring three goals in 27 appearances.

Speaking to the Norwich website, McCallum said: “The last 24 hours have been hectic to say the least but quite overwhelming as well. Everyone has welcomed me with open arms, so it’s been good.

“The club’s got a good philosophy of bringing through young players like Max (Aarons) and Jamal (Lewis), as well as Ben Godfrey. It’s a good philosophy. The style of play attracted me to coming here.”

“He’s a young, homegrown player who we hope can continue to develop and improve. We will allow him to work with all of the right tools in our environment and look forward to seeing how far he can progress.”