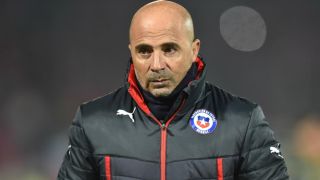 New Football Federation of Chile (ANFP) president Arturo Salah said he wants Jorge Sampaoli to respect his contract but confirmed the coach has tried to negotiate an exit.

Sampaoli, who guided Chile to their first ever major trophy at the 2015 Copa America, has reportedly been seeking an exit since former ANFP president Sergio Jadue resigned amid a corruption investigation.

The 55-year-old has been linked with a move to the Premier League, but Salah wants Sampaoli to honour his contract and guide Chile to the World Cup in 2018.

"Sampaoli has a contract and he will continue with us," Salah said. "He has confirmed that he is hurt with everything that has happened.

"Sampaoli is wounded, and has been touched by everything that has happened recently. But we are hoping Sampaoli accompanies us to 2018.

"He is restless but we are enforcing a contract that both sides have to fulfil."

Salah confirmed Sampaoli has attempted to negotiate an exit from his role, asking for a reduction of his exit clause.

"Sampaoli asked to lower his exit clause but we want him to respect his contract," he added.

"We are searching for his continuity, the continuity of his contract that is signed and we want fulfilled. Sampaoli has not said he wants to continue.

"We are not in negotiations. If he wants to leave, he has to pay."