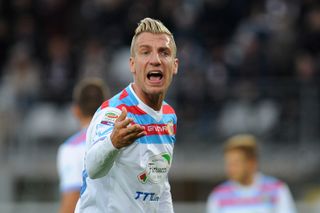 Lopez, who spent time on loan at the club last season, initially arrives from Catania on another temporary deal, albeit with a view to a permanent switch at the end of the campaign.

The 29-year-old has made only five starts for Catania this term, but will now seek to gain more regular action with Mihajlovic's men, who face a derby against Genoa on Sunday.

"Sampdoria can announce it has acquired, on a temporary basis with the option to purchase outright, Maxi Lopez from Catania," a statement read on the club's official website.

"The striker will be available for coach Sinisa Mihajlovic for this afternoon's (Tuesday) training session."

Lopez scored four goals in 17 Serie A appearances during his previous spell at Sampdoria.