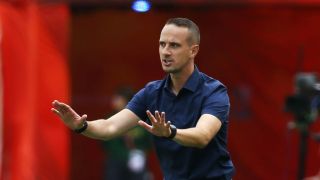 Mark Sampson has agreed a two-year contract to remain as coach of England Women until 2019.

Sampson guided the Lionesses to third place at last year's World Cup in Canada and they are fifth in the FIFA World Rankings - their highest-ever placing.

The 33-year-old, who was appointed in December 2013, will now lead England through next summer's European Championship and into the 2019 World Cup.

He told the Football Association's official website: "I am delighted to have agreed to continue working with the Lionesses through to the 2019 FIFA Women's World Cup.

"It is an honour and a privilege to manage such a fantastic group of people who represent their country with incredible pride and passion.  We have all worked very hard over the last two years to improve both individually and collectively and our World Cup bronze medal highlights the progress this team has made.

"It was crucial post the World Cup we worked hard to continue to grow the game and I am pleased with the steps we have taken we are ready to do just that.

"It is an incredibly exiting period for all players and supporters of the Lionesses and I am proud to continue leading the team through this special journey."

FA technical director Dan Ashworth said: "Since Mark was appointed he has shown he is an excellent coach and leader, instilling a real confidence in the side and getting results.

"We're committed to the growth and development of the women's game and our focus is on creating winning England teams. I am confident that under Mark's leadership this England team has the capability to go on and enjoy success at future tournaments."

Sampson is shortlisted for the FIFA Women's World Coach of the Year award, which will be announced on Monday, alongside Jill Ellis and Norio Sasaki.