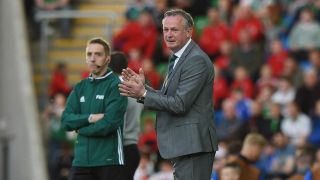 Northern Ireland are closing in on a World Cup qualifying play-off place despite making hard work of a 3-0 victory in San Marino on Friday.

All three goals arrived in the final 20 minutes – through Josh Magennis twice and Steven Davis' penalty – as the second-placed side in Group C won a fourth consecutive international for the first time in their history.

It had started to look as though San Marino might improbably end a 17-game losing streak, with Michael O'Neill's men passing up chance after chance, before Magennis prodded in the opener in the 70th minute.

O'Neill's side remain on track and a draw against third-placed Czech Republic – now seven points off the pace – at Windsor Park on Monday will guarantee a top-two spot.

Davis sent an early volley dipping past the right-hand post for the visitors, before Oliver Norwood's looping header dropped just wide to the relief of stranded goalkeeper Aldo Junior Simoncini.

Magennis nodded off target, too, and San Marino somehow scrambled clear after Davis had shimmied into space in the area and seen his shot deflected away.

A frustrating opening period continued for Northern Ireland as Simoncini denied both Magennis and Conor Washington, his solid parries completely at odds with earlier flaps from crosses.

Washington then shot wide and Magennis headed against the left-hand upright on the stroke of half-time – Jonny Evans slicing the rebound – as the visitors inexplicably retreated to the dressing room with the game still goalless.

The away supporters' exasperation only grew after the break, however, as O'Neill's men initially struggled to create chances with the same frequency.

Simoncini punched a speculative Norwood free-kick out for a corner and won a generous foul as he dropped the resulting delivery at Evans' feet for an easy tap-in.

The keeper gathered rather more comfortably from Davis' tame angled strike and then watched Norwood's 20-yard drive whistle past his post.

But the goal finally arrived when Magennis, somehow denied from close range seconds earlier, turned Davis' low cross into the net with Simoncini still picking himself up.

Simoncini continued to impress with stops from Magennis and Chris Brunt, but the goalscorer grabbed his second with a firm header into the bottom-right corner to clinch the points.

And a third soon arrived. Alex Gasperoni's handball in the area presented Davis with a chance from the spot, the visiting captain calmly converting to cap the result.