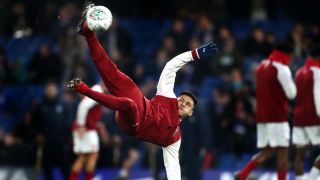 Arsene Wenger explained his decision to leave Alexis Sanchez on the bench for Arsenal's EFL Cup semi-final clash with Chelsea as "the decision of the day".

Chile forward Sanchez has been heavily linked with a move to Manchester City and The Guardian reported on Tuesday that the Premier League leaders have lodged an initial £20million bid for a player who is out of contract at the end of the season.

Speaking to Sky Sports before the first-leg meeting with Chelsea at Stamford Bridge, Wenger insisted the 29-year-old was focused on the task at hand.

"You cannot explain every single decision. That is the decision of the day," he said.

"Of course, he is completely focused. He has given a lot recently."

We're almost ready for kick-off here at Stamford Bridge - where in the  are you following from?Wherever it is, thanks for your support - now let's do this TOGETHER January 10, 2018

In 21 appearances across all competitions this season, Sanchez has scored eight goals. His sole outing in the EFL Cup came in the third-round win at Doncaster Rovers.