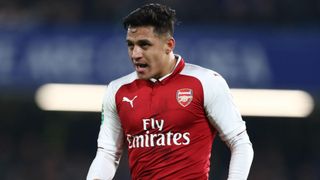 Alexis Sanchez has been left out of the Arsenal squad to face Bournemouth on Sunday amid fevered speculation linking the Chile international with a move away from Emirates Stadium.

Sanchez is out of contract at the end of the season and, with no indication he is willing to agree a new deal, can leave on a free transfer in June unless the Gunners agree to sell the 29-year-old for a reduced fee this month.

A switch to rejoin his former Barcelona coach Pep Guardiola at Manchester City fell through on deadline day in August, when Arsenal were unable to bring in Thomas Lemar from Monaco.

And while City are still believed to be keen to sign Sanchez, Manchester United have reportedly sought to hijack his proposed move to the runaway Premier League leaders.

Jack Wilshere does start for Arsenal at the Vitality Stadium after shrugging off an ankle injury sustained against Chelsea in midweek.