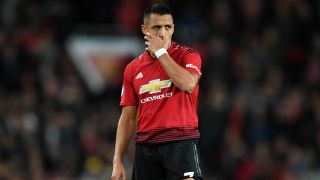 Reinaldo Rueda included Barcelona recruit Arturo Vidal for the trip to the Far East, where Chile will face Japan and South Korea on September 6 and 10 respectively.

However, Chile's all-time leading goalscorer and most-capped player Sanchez was not on the list, having struggled for form and fitness at United.

Sanchez missed the shock defeat to Brighton and Hove Albion with a "little problem", while the 29-year-old came off the bench in last week's 3-0 loss against Tottenham.

"He is recovering but all that this trip means the suggestion was that he should not participate in these friendlies.

"Respecting that and what Alexis feels we did not take into account for this call."

Chile, who failed to qualify for the World Cup, meet Japan in Sapporo before visiting Suwon to play South Korea.