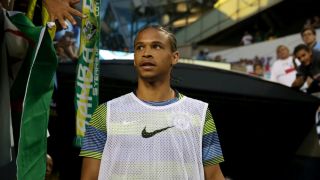 Leroy Sane is determined to use his World Cup snub as motivation to perform even better for Manchester City next season.

The 22-year-old was a surprise omission from Germany's squad in Russia despite a sensational 2017-18, Joachim Low instead opting for Julian Brandt in his final 23-man party.

It meant Sane had to watch from home as Die Mannschaft suffered a shock early exit, defeats to Mexico and South Korea sending the 2014 champions home in the group stages.

Sane has almost put the disappointment behind him, but it still spurs him on to hit new heights for Pep Guardiola's side in 2018-19.

"It was [a shock]. I was disappointed at the time and it was really hard for the first week," he said.

"Pep Guardiola had a chat with me after it happened. We talked about everything and how my mind was. Now, we are just looking forward.

"It's just made me want to come back really strong. It was a surprise because I thought I'd played quite a good season.

"Like I said, I was disappointed and I'm still feeling it a bit but it's another season for me and I'm looking forward to it.