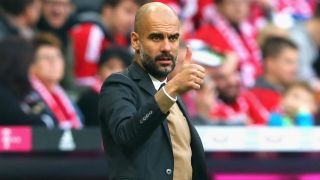 Pep Guardiola will bring a better brand of football to Manchester City next season, according to striker Roque Santa Cruz.

The Bayern Munich boss will take charge at the Etihad Stadium in July, having agreed a three-year deal to succeed incumbent Manuel Pellegrini.

City have won the Premier League and two League Cups under Pellegrini, while the Chilean has also guided them to the semi-finals of the Champions League this season for the first time in their history.

Yet Santa Cruz - who spent eight years at Bayern before later joining City - believes Guardiola's style will make a huge difference at City in the coming years.

"I think City like to play good football," he told Omnisport. "They have some great players.

"I think they will value Guardiola's playing philosophy a lot. They'll keep evolving even more and they'll be even more competitive with him. I think we may see Manchester City playing much better football."

City's improved fortunes in Europe this season have been helped by the arrival of Kevin De Bruyne, who struck the crucial goal in the quarter-final win over Paris Saint-Germain to cap a superb first campaign back in England.

Santa Cruz, however, feels the strength of the collective at City has been far more important than the form of individuals.

"I think he's going through a very good moment but I think that City are a team who don't depend on any individual player," said the Malaga striker. "Sergio Aguero has scored a lot of goals, De Bruyne is playing great, and there are many more like Fernandinho who push the team and lead them.

"As a group they are a very solid team, that's their strength."

Santa Cruz struggled to settle in a difficult spell in Manchester between 2009 and 2013, and he concedes it was disappointing to be hampered by injuries during a time of huge upheaval at the club following Sheikh Mansour's takeover in 2008.

"I was glad to be part of that new project. Then I started with a lot of injuries, I couldn't find my way of playing or enough room to play. It was hard for me.

"But, of course, having been there, having been a part of the great group of players that was there, was very emotional. I had a great time there. It was only that, because of the injuries, I couldn't play a lot or be at the level that I wanted to be at."