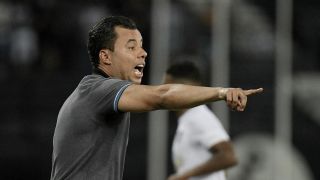 Jair Ventura has been named the new head coach of Brazilian giants Santos.

The 38-year-old joins the club from Botafogo, who he led to the quarter-finals of the 2017 Copa Libertadores before losing to eventual champions Gremio.

Santos thanked Elano and Marcelo Fernandes for their efforts in leading the team on a temporary basis following the departure of Ventura's predecessor Dorival Junior.

Ventura is the son of former Brazil striker Jairzinho, part of the 1970 World Cup-winning team.