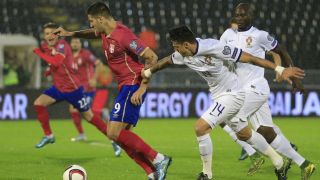 Serbia finished fourth in the five-team Group I after losing 2-1 at home to table-leaders Portugal on Sunday.

Aleksandar Kolarov and Nemanja Matic were sent off late in Belgrade as Serbia's disappointing qualifying campaign came to an end.

Santos was surprised to see Serbia - who were deducted three points after last October's fixture at home to Albania was abandoned - finish 10 points adrift of their Balkan rivals and second position, given coach Radovan Curcic has Kolarov, Matic, Branislav Ivanovic, Dusan Tadic, Adem Ljajic and Aleksandar Mitrovic at his disposal.

"I think that Serbia have great players, and deserved to finish second," Santos said via UEFA.com.

"But then again - this is football."

On his own team's performance in the Serbian capital, which saw Cristiano Ronaldo, Fabio Coentrao, Bernardo Silva and Jose Fonte rested, Santos added: "I knew that the young players can contribute.

"We are preparing the next generation and we will test them in the upcoming friendlies so that they are prepared for the finals."