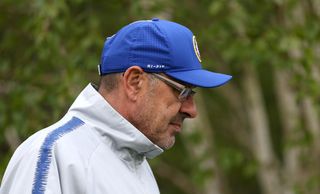 Maurizio Sarri believes Chelsea are “in trouble” for their Europa League semi-final due to a centre back injury crisis.

Cesar Azpilicueta will cover centre back at the Commerzbank Arena, with Antonio Rudiger also sidelined for three months after knee surgery.

“We’ve played 58 matches so injuries are typical. We were lucky previously but not in the last 10 days.”

Chelsea skipper Azpilicueta insisted he is ready to step in at centre back if required.

“I’m ready to play wherever the manager needs me to play,” said Azpilicueta.

“But I can adapt to different positions. So I’m ready for it.”

Sarri explained that Germany defender Rudiger will be sidelined for three months after surgery to repair the meniscus in his knee.

Rudiger had battled to play through the problem until the end of the season, with the club aware he would need surgery but also knowing he could not exacerbate the injury.

The 26-year-old returned to action for Sunday’s Manchester United trip then, only to pull up again, unable to push through to the campaign’s conclusion.

“Rudiger is out for at least three months I think,” said Sarri.

“He’s upset of course but is very strong and I’m sure he will come back stronger. We tried to arrive at the end of the season, but the injury was there. He had a problem with his meniscus, it was broken.

“We tried to arrive to the end of the season because sometimes you are able to play for one month (with the injury). But the situation was the same.”