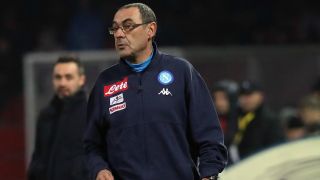 Napoli head coach Maurizio Sarri said discussions will take place regarding a new contract "over the next few days" following links with Premier League side Chelsea.

Sarri, 59, has reportedly emerged as a target for Chelsea, who are apparently considering the future of Premier League-winning boss and fellow Italian Antonio Conte.

Napoli have earned rave reviews for their style of play under Sarri, with the Italian high-flyers a point clear atop the Serie A.

Asked about reports president Aurelio De Laurentiis is set to offer a new deal, Sarri told Mediaset Premium: "I can't meet anyone on Friday, as we have a game on Saturday.

"I want to focus on other issues right now, so someone will meet with the president over the next few days and listen to the proposal on my behalf.

"There's no problem between Aurelio and I, so it's not an issue."

Napoli stayed top of the standings thanks to Sunday's 2-0 win over Benevento.

Dries Mertens and Marek Hamsik scored for Napoli, who moved back above Juventus after the defending champions embarrassed Sassuolo 7-0.

"The surprising thing is that Napoli are up there, not Juventus," Sarri said. "This team picked up 60 points in 23 games, an extraordinary tally. Juve are going at more or less the same pace, but they are accustomed to it.

"We cannot feel pressure, because we are going beyond anyone's expectations. Don't forget, pre-season you all said it was a fight between Juventus and AC Milan. We are doing better than I expected, than the club expected, so there is zero pressure."

Mertens hobbled off with an ankle injury in the victory and Sarri said: "We'll evaluate Mertens tomorrow [Monday]. He had a knock and a slight sprain, it doesn't seem particularly serious."