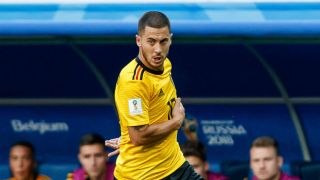 Maurizio Sarri is confident Chelsea can hang on to Eden Hazard, Willian and Thibaut Courtois despite LaLiga's tops clubs circling.

Real Madrid and Barcelona have been linked with moves for the trio, who were absent from Chelsea's 1-0 victory over Perth Glory in Sarri's first game in charge of the Blues on Monday.

All three remain on holiday after their exploits at the World Cup, but that has not stopped the rumour mill kicking into gear with reports of a mass exodus at Stamford Bridge.

Madrid are reportedly keen to acquire Golden Glove winner Courtois and his Belgium team-mate Hazard, while Barca are said to be interested in adding Willian to their attacking riches.

Losing all three players would be a huge blow at the start of Sarri's reign, but he believes they will be part of his squad going forward.

"It doesn't depend only on me," he told a media conference. "[But] I am confident [they will stay]."

When asked if he had spoken to any of the trio since replacing Antonio Conte he added: "I like to talk to a person face to face."

Courtois, Hazard and Willian are due to report back for club duty at the end of the month ahead of the 2018-19 campaign, with the transfer window closing on August 9.