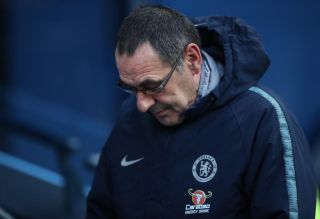 Maurizio Sarri was sent to the stands as Chelsea blew a big chance to stake their Champions League claim by slipping to a 2-2 Premier League draw with Burnley.

Chelsea defender Antonio Rudiger and Burnley goalkeeping coach Billy Mercer had to be separated by the officials at the final whistle, as a gripping encounter ended in ugly touchline scenes at Stamford Bridge.

David Luiz and Ashley Westwood later clashed as the teams attempted to depart via the tunnel, in a frantic west London encounter.

N’Golo Kante and Gonzalo Higuain blasted two goals in as many minutes for the Blues, but rank set-piece defending let Jeff Hendrick and Ashley Barnes plunder goals for the Clarets.

Head coach Sarri’s men did move fourth in the table courtesy of their draw, but dropping two points at home could prove costly in the Champions League race – as could worrying injuries to Callum Hudson-Odoi and Kante.

Hudson-Odoi limped out with a leg problem, while Kante picked up a back complaint.

Chelsea must face Manchester United at Old Trafford on Sunday, with only Watford at home and Leicester away to come after that.

The Blues’ only comfort comes in the shape of top-four rivals United’s 4-0 loss to Everton and Arsenal’s 3-2 home reverse to Crystal Palace, on a turbulent weekend.

The Blues threw everything at Burnley in the second-half but in vain, falling prey to a the rearguard graft of Sean Dyche’s team.

Eden Hazard’s 13th assist of the season, laying on the opener for Higuain, had the Blues faithful purring at their star man and Real Madrid target.

Chelsea’s supporters rightly hang on his every feint and shimmy, desperate to catch him while they can – especially when his opponents cannot.

This was another masterclass in wing play from the Belgium talisman, who had Burnley’s defence flailing at his floodlit shadows all night.

But Chelsea could find no way through the Clarets’ regimented two banks of four after the break, and duly conceded ground in the race for Champions League qualification.

Hendrick’s sweet volley handed Burnley the lead against the run of play, Chelsea failing to clear a corner.

Kante and Higuain struck two goals in as many minutes to turn the tide though, with both efforts easy on the eye.

Then Higuain spun in the area, exchanged passes with Cesar Azpilicueta and rifled into the roof of the net.

Chelsea continued to press, Loftus-Cheek, Hazard and Higuain all off target.

But amid that general dominance the Blues switched off at another set-piece, and were duly punished again. This time Chris Wood nodded a free-kick across goal and Barnes finished well on the slide.

Chelsea turned around frustrated and intent on finally taking control, only for Higuain to undercook an effort after Pedro’s square ball.

Emerson Palmieri fired wide from 20 yards as Chelsea pressed, ignoring Hazard in space on the overlap.

Hazard outwitted Lowton again but to no avail, before Azpilicueta saw a low effort rebuffed by Tom Heaton.

And when the Blues were reduced to a 25-yard pot-shot from Luiz, Sarri called France World Cup-winner Olivier Giroud off the bench for the last 15 minutes.

The change energised the Blues fans, but left Higuain throwing drinks bottles around the dugout, the 31-year-old petulantly venting frustrations on his withdrawal.

Loftus-Cheek directed Mateo Kovacic’s teasing ball across the face of goal but Giroud could not stretch for the finish.