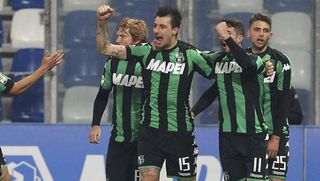 Sassuolo's bid for a Europa League spot suffered another setback as they extended their winless run at home to four games in all competitions with a 1-1 draw against Torino in Serie A.

The visitors began brightly in a contest that was postponed back in December due to heavy fog as Andrea Belotti wasted an early chance by poking wide from close range, but made amends after 22 minutes by sweeping home Marco Benassi's low cross for his third league goal in two games.

Sassuolo responded and would have levelled through Federico Peluso were it not for Kamil Glik's goal-line clearance.

But the hosts were not to be denied and restored parity six minutes before the break when goalkeeper Salvador Ichazo parried Davide Biondini's effort into the path of Francesco Acerbi, who applied a cool finish.

Sassuolo had the ball in the net again 10 minutes from time, only for Peluso's effort to be chalked off for offside, before Nicola Sansone diverted a free header wide as Torino held on for a well-deserved point.