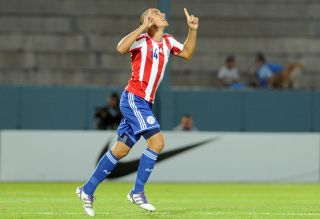 The 17-year-old had been widely tipped to move to Roma during the January transfer window, however the Italian capital club cannot register Sanabria this season.

Italian clubs are only permitted to sign two players from outside the EU from a foreign country per season, with Roma having purchased Gervinho and Maicon - who do not hold EU passports - in pre-season.

Brazil international Michel Bastos' arrival from Al Ain earlier in January did not fall under scrutiny as the winger holds a French passport.

Barcelona confirmed that Roma had put them in touch with Sassuolo over the move and Sanabria, a Paraguay international, is expected to stay at Stadio Citta del Tricolore until the end of the current season before moving to Rome next term.

"Barcelona and Sassuolo have agreed a transfer for Tonny Sanabria to the Serie A club in an operation that is close to €12m," a statement on Barcelona's official website read.

"Of this sum, €4.5m are guaranteed, while the rest are tied to the player's performances and his future market value.

"The contacts for Sanabria's transfer began with Roma, then the Italian club put Barcelona and Sassuolo in contact to finally conclude the operation."