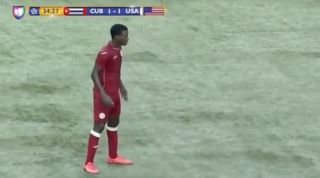 Under-17 championships around the world are all about countries showcasing their best young footballing talent, and rawness is expected.

However, there's a fine line between that and just plain awful. In Espino's case, his set-piece ability appears to fit into the latter category.

In the 34th minute of Cuba's game against USA in the CONCACAF U17 Championship in Panama, Espino stepped up to a free-kick with a Cristiano Ronaldo-like stance and hope in his heart.

That soon fizzled out. Sadly for the Artemisa defender, he is not Ronaldo and won't be trying too many more of these. His venomous strike below was so badly hit that it went out of the stadium.

But don't worry, Karel: time is on your side. Even Cristiano isn't that great at free-kicks.