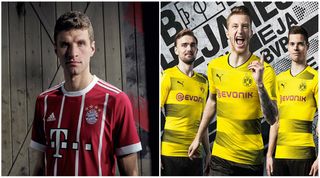 As is the current trend of paying homage to the Good Old Days, adidas have created a Bayern Munich kit modelled around the club's 1974 strip – the league giants welcome back thick, white stripes on the front of the shirt and on each sleeve.

Bayern's team motto “Mia San Mia”, which literally means "we are who we are", also features on the kit's reverse.

Perhaps the biggest change from their current strip is the Bundesliga champions' return to red shorts, instead of the white they've worn in 2016/17.

Meanwhile, rivals Borussia Dortmund will be debuting their new kit this weekend against Werder Bremen. The new Puma strip is still – hold the front page – yellow, but also featuring sporadic horizontal stripes as the shirt fades from yellow to black.

Marco Reus loves it, at least. He said: "I like the new design that Puma has developed. The horizontal stripes with the colour gradient are really cool.

"We want to celebrate a terrific end of the season with the new jersey and then we want to attack in all competitions and celebrate great successes in the new season.”

Over to you then, Marco.