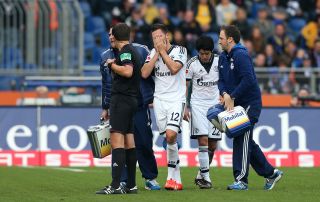 Hoger picked up the injury in Schalke's 3-2 win over Eintracht Braunschweig on Saturday, sealed by Roman Neustadter's 90th-minute effort.

However, coach Jens Keller has been boosted by the news that Jermaine Jones, Kevin-Prince Boateng and Timo Hildebrand are all in line to return for Schalke's UEFA Champions League clash against Chelsea on Tuesday.

Jones had been suffering with a knee injury, while a similar problem for Boateng kept him out of Ghana's FIFA World Cup qualifying win against Egypt on Tuesday.

Goalkeeper Hildebrand is also available after recovering from back pain.

"We are terribly sorry about the bad injury to Marco Hoger, but Jermaine Jones, Kevin-Prince Boateng and Timo Hildebrand will be back," Keller said.

"Boateng has trained a lot and will do so today. If he comes up to me and tells me he is fit, I will play him and we wish for that to happen.

"Lots of our current injuries came from accidents and cannot be put down to training problems. It is not so much bad luck, we just have to accept the situation and make the best out of it."

Keller's men have a 100 per cent record in the group, after keeping clean sheets in victories over Basel and Steaua Bucharest.

He does not believe a draw against the Premier League side would be a disaster for Schalke's European hopes, with Jose Mourinho's men currently six unbeaten in all competitions.

"I have always said I want to win every game but you have to see how the game goes," said Keller ahead of the clash at the Veltins Arena.

"Maybe a draw would be ok and we could live with that situation.

"Chelsea are a top side with enormous quality. We have a lot of confidence from our recent results as well as our good showings in the Champions League over the past years.

"With the fans (behind us), obviously we want to give our best."