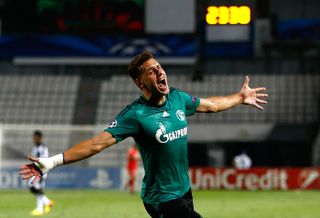 The Hungary international suffered a capsule and bone marrow edema in his right wrist prior to his side's 3-2 UEFA Champions League play-off victory over PAOK on Tuesday.

Szalai scored twice in the match, including a last-minute winner, as the German outfit secured progression to the competition's group stages.

With fellow striker Klaas-Jan Huntelaar out of action with a knee injury, the club have been boosted by the news that Szalai will not require an operation and is unlikely to miss any games.

"I'm very happy that it's nothing serious," he told the club's official website.

"I was desperate to play. There was no way I was going to miss the game."

Szalai has scored twice in the Bundesliga this season, but Schalke sit 15th in the standings and are without a win.