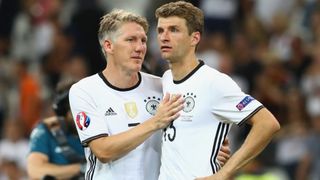 Germany captain Bastian Schweinsteiger says his side can be proud of their Euro 2016 campaign despite a 2-0 semi-final defeat to France.

The world champions were the dominant side in the first half in Marseille but fell a goal behind just before the break. Antoine Griezmann converted a penalty awarded after Patrice Evra's header struck Schweinsteiger's hand.

Germany continued to press in the second period but Griezmann prodded home with 18 minutes to play to secure the win for the host nation and set up a final against Portugal.

Schweinsteiger feels luck was against his side at the Stade Velodrome but believes they deserve credit for sticking to the style of football that saw them triumph at the World Cup in Brazil two years ago.

"It's a real shame," he began in an open letter published on the DFB's official website. "Our dream has not been fulfilled. We didn't make it to the final, so Rio will not be followed by another magical night.

"Unfortunately, we were missing something extremely important against France: a little bit of luck. Defeats are a part of the game though, even if they hurt. We can accept our opponent's performance and sincerely and warmly congratulate the French team on progressing to the final.

"I am proud of what we have achieved. We have stayed true to playing our style of football. We have continued to grow as a team in the last seven weeks and this togetherness, which made us strong in Brazil two years ago, has done the same again here in France.

"Our fans are also a part of it. Wherever we were, Lille, Saint-Denis, Paris, Bordeaux or Marseille – thanks to you we had our twelfth man by our side."