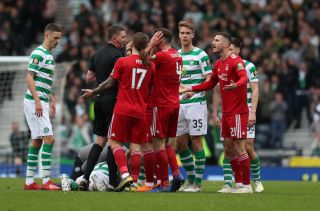 The Dons ended up with nine men after having both Dom Ball and Lewis Ferguson dismissed during their William Hill Scottish Cup semi-final at Hampden.

Boss Derek McInnes and his assistant Tony Docherty also finished the game watching from the stands after run-ins with the officials.

But Neil Lennon’s side refused to show any mercy as they booked their place in the final against Hearts next month, with goals from James Forrest, Odsonne Edouard and Tom Rogic sealing a 3-0 triumph.

And skipper for the day McKenna says his side contributed to their own downfall by failing to stay on side with referee Craig Thomson.

He said: “It’s disappointing. It’s a semi-final but we’ve been beaten convincingly. We did not give a great show of ourselves at all.

“We lost our discipline and went down to 10 men. But it was still 0-0 at that point.

“We then lost a goal, albeit it was a great finish from James, but it was still probably avoidable even with us being a man down.

“Once you go a goal behind with 10 men it’s an uphill battle. The second goal came quite early in the second half, then we were down to nine. There’s no coming back from that.

Ball was shown a second yellow after he smashed his head into Ryan Christie’s in a sickening first-half collision.

However, the Scotland defender had no complaints about Thomson’s decision to send off Ferguson after a shocking two-footed lunge on Rogic.

“I thought the first sending-off was harsh,” said McKenna.

“We had Gary Mackay-Steven knocked out in the cup final earlier on in the season yet nothing was given for that.

“I don’t know if it was any worse than today’s but it looked similar to me.

“Lewis has gone in hard to win the ball but it’s a little bit reckless and the red card was the right decision.

“But I’m sure he’ll learn from it. We’ve all made those mistakes before, we just need to cut them out.”

The Dons’ dreams of a first Scottish Cup win since 1990 are over but McKenna insists his side have plenty to play for before the end of the campaign.

“We’re in a battle for third spot still, maybe even second if we win all our games,” he said.

“We’ve just got to pick ourselves up. Kilmarnock are the nearest side to us and we play them on Saturday.

“We need to get this defeat out of our system as early as possible in the week and focus on Killie.

“The season isn’t gone. There are five massive games for us to try and clinch a European slot which is demanded at this club.”