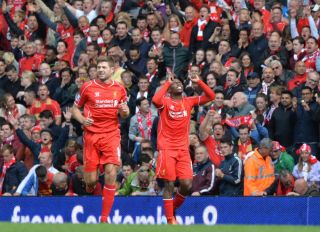 Sturridge netted a 79th-minute winner at Anfield on Sunday to down Ronald Koeman's men 2-1 in Liverpool's season opener.

It was not a flashy victory for Brendan Rodgers' side, who are looking to overcome their heart-breaking finish to the 2013-14 season in which they coughed up a golden chance to end their Premier League drought.

Sturridge said unglamorous wins will be the backbone of the Reds' title charge, with the club losing a huge portion of their attacking flair when Luis Suarez departed for Barcelona in the close-season.

"It's very important for us to show resilience and have the mentality to show we can fight as a team.

"In these instances, when we play against teams that are going to make it very difficult for us to break them down, we have to try and find different ways to win games.

"Whether it be individual brilliance, poacher's goals, a set piece or something.

"It doesn't matter how, we have to win these games by any means possible.

"This shows we can win the dirty games as well as playing the nice football, with the intricate moves and the one-twos around the box."

Despite their underwhelming opening, Sturridge said Liverpool still feared no opponent as they looked to atone for their collapse last season.

"It doesn't matter what the opposition is. We have got a belief in the manager's philosophy and with the individuals we have and the way we play collectively, we can beat anyone," he said.

"It doesn't matter who we play, it doesn't faze us.

"The manager has made some great signings and we are looking forward to having a successful season. We are hungry for success.

"Everyone is hungry for success here."

Sturridge, who went to the World Cup for Roy Hodgson's men and started in all three games in Brazil, said he was "mentally" over the Reds' failure to capture the league title.

"We were heartbroken last season but we have got ourselves mentally ready," he said.