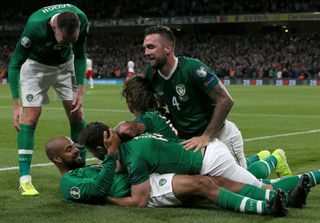 Seamus Coleman has warned the Republic of Ireland’s Euro 2020 rivals to beware the nation’s innate refusal to give up the fight.

Ireland emerged from their toughest Group D fixture to date, Switzerland’s visit to the Aviva Stadium on Thursday evening, with a hard-earned 1-1 draw thanks to David McGoldrick’s late header.

Switzerland, ranked 11th in the world, had the better of the game but were unable to push home the advantage given to them by Fabian Schar’s fine 74th-minute strike.

And just as they had done in Denmark in June, the Republic fought back and scored a late equaliser.

“We don’t get things handed to us. Every one of us out there on the pitch has probably been rejected at some point in our career and you have to have something inside you to keep going, and a lot of our lads out there have that.

“You see Richard Keogh bust a gut every week at club level – he’s played 600 games. We’ve got great characters in our squad and that helps drive us on.”

Ireland rode their luck at times, with the Swiss having dominated the midfield battle on a night when highly-rated Borussia Monchengladbach striker Breel Embolo was unable to mark an otherwise impressive individual display with a goal.

Manager Mick McCarthy admitted his side will have to be significantly better in the return game in Geneva next month, and ultimately it seems likely that they will have to beat either Switzerland or Denmark to secure a top-two finish.

Ireland remain top of the pile, three points better off than Denmark and six ahead of the Swiss, both of whom would join them on 11 points should they win their games in hand.

However, Coleman is confident Thursday night’s result served as a reminder that there are more than two horses in the race.

Asked what message it sent, he replied: “Just that we’re a hard team to beat, we never go away.

“Next month is a massive month for us, but I don’t think any team will look forward to playing us either.

“We’ll go there with confidence, we’ll go there on the front foot. We know we’ll probably have to sit in at times, but we’re capable of catching teams on the break and we’re really looking forward to it.

“I hope everyone goes back to their club now and does well and comes back all guns blazing.”