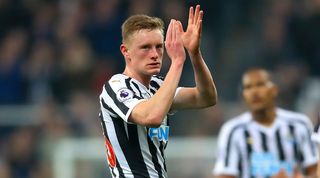 Newcastle midfielder Sean Longstaff is to see a specialist on Tuesday over the knee injury which forced him off the pitch at West Ham at the weekend.

The 21-year-old, whose form has seen him tipped to receive an England Under-21 call-up this month, failed to re-appear for the second half during Saturday evening’s 2-0 defeat at the London Stadium.

Press Association Sport understands Longstaff is to consult a specialist as both he and manager Rafael Benitez wait anxiously to discover the extent of the damage.

The academy graduate has been a major hit at St James’ Park since emerging from the ranks in December to establish himself in the first team and retain his place ahead of more senior players.

Longstaff, who has been likened to former Manchester United star Michael Carrick in his style of play, was handed his Premier League debut as a substitute in a 4-0 defeat at Liverpool on Boxing Day and his first start in the competition at Chelsea on January 12, and he has not looked back since.

He has played in vital wins over Cardiff, Manchester City, Huddersfield and Burnley, forming an impressive partnership with Isaac Hayden in the absence of Jonjo Shelvey, Mohamed Diame and Ki Sung-yueng, who have had to wait patiently in line since returning to fitness.

However, his run seems likely to come to an end when Everton head for Tyneside on Saturday.