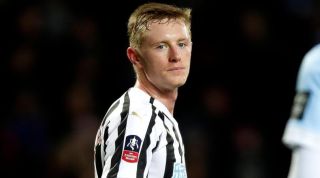 Sean Longstaff has opened up on what it was like to be linked with a move to Manchester United this summer.

The Newcastle midfielder broke into the first team at St James’ Park last term, making 11 appearances under Rafael Benitez before a knee injury prematurely ended his season in March.

A fine series of performances earned the 21-year-old rave reviews from Benitez, while United were also impressed by his displays in the engine room.

The Red Devils were unable to prise him away from the northeast, though, with Newcastle keen to hold on to one of their prized assets.

Longstaff is now nearing a return to action for his boyhood club, but he has revealed that his fitness struggles in pre-season put the United rumours into perspective.

“You’re seeing stuff about yourself on the telly and the next day I’m in the gym and I can’t even step on to a box that’s the height of my shin, or get up the stairs without grabbing on to something,” he told The Times.

“It’s not really something for me to comment on. It’s between the clubs. I was flattered to get my name mentioned in those conversations but, like my dad says, ‘Sport’s got a funny way of dragging you back down to earth.’”

Longstaff only made his Newcastle debut last December, having spent the previous two seasons on loan at Scottish Premiership side Kilmarnock and League One outfit Blackpool.

But despite his rapid rise from Premier League debutant to Manchester United target, the youngster says he remains the same person as before.

“I don’t want to change from the way I was before,” he added. “If that’s what’s brought you success then don’t change.

“Sometimes it’s a little bit surreal when people are stopping you and talking to you. I’m still the same shy kid I always was, really.”

Newcastle travel to the King Power Stadium to take on Leicester on Sunday.