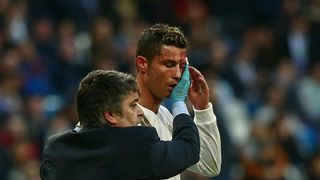 Cristiano Ronaldo netted a late brace in Real Madrid's 7-1 demolition of Deportivo La Coruna, only to leave the field covered in blood and peering into a mobile phone.

The five-time Ballon d'Or winner was a picture of frustration, passing up simple chances as Gareth Bale turned the match emphatically in Madrid's favour on the back of Adrian Lopez's 23rd-minute opener for Depor.

Ronaldo made it 5-1 by converting Casemiro's cross from close range and a brave header from Lucas Vazquez's centre gave him a sixth LaLiga goal of the campaign.

It came at a price, as Fabian Schar's boot left the 32-year-old with a nasty cut above his left eye.

1 - Cristiano Ronaldo has both scored and assisted in a La Liga game for the first time this season (two goals and one assist). Balsam. January 21, 2018

Looking like a prize-fighter rather than a prize-winning forward, Ronaldo was led from the field by Madrid's doctor and borrowed a phone that seemingly belonged to the medic to inspect the damage – surely an act more concerned with surgery than selfies.

After the match, head coach ZInedine Zidane confirmed stitches were required but played down fears over his star man's condition.

"Cristiano has a cut, they have done two or three stitches. He is fine, it is just that," he told reporters.