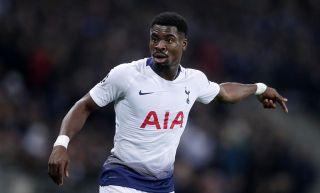 Aurier is on international duty with the Ivory Coast at the moment and has been contemplating last summer as well as his future.

Since then, the defender has struggled to make a significant impact in north London and was often playing second fiddle to Kieran Trippier.

Trippier eventually fell out of favour and was replaced in the starting XI by Kyle Walker-Peters.

Aurier may have sniffed a chance at a first-team return when Trippier joined Atletico Madrid last summer, but has conceded he was also looking to leave.

"I was looking for an exit, so I couldn't play. When you're trying to move, you can't play because an injury or whatever else can scupper everything," he said (as reported by football.london).

"I wanted to leave so it was normal for me not to be on the pitch. Beyond that, it's the manager's decision. He's the one who decides what's best for the group."

It seemed like both club and player had a change of heart in September when Aurier revealed he was prepared to stay.

His name was one more added to a growing list of Spurs players reported as wanting to leave the club.

When speculating on his future, the Ivorian went on to say that his desire to leave the club wasn't out of the ordinary.

"Like I've said, the season is long so we'll try and be better going forward and for what comes next," he said.

"That desire to leave, I think it's a bit normal. I'm an important player of the national team. I'm not 20 anymore and I need to play, to be happy."

Aurier has featured three times for Spurs in the Premier League this season, providing one assist and receiving a red card.