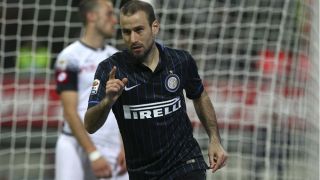 The San Siro outfit are without a victory since beating Celtic in the UEFA Europa League last month and have since failed to overcome Fiorentina, Napoli and Wolfsburg.

Inter looked likely to end that disappointing streak as they started the brighter, but fell behind to a Gregoire Defrel lob after 28 minutes.

The home side upped their game after the break and, after Mateo Kovacic had seen an overhead kick ruled out for offside, Rodrigo Palacio restored parity.

For all their pressure, though, Inter were unable to find the winner – Lukas Podolski coming closest when he powered an effort against the post.

The result lifts Inter to seventh, while a point is not enough to haul Cesena out of the relegation zone.

Fredy Guarin was unable to get on the end of a dangerous Dodo cross in the 13th minute as the hosts applied the early pressure.

Inter continued to knock on the door and Zdravko Kuzmanovic directed a powerful header wide from a Guarin ball over the top a minute later, but the hosts were forced into a change when Xherdan Shaqiri pulled up with an apparent hamstring problem – Kovacic his replacement.

Kovacic instantly looked to terrorise the visiting defence, running at the back four in a bid to force the breakthrough, but it was Cesena who opened the scoring against the run of play.

Defrel ran onto a Carlos Carbonero throughball before lofting a delightful chip over the head of the advancing Samir Handanovic.

Kuzmanovic saw a drilled effort blocked in the box before the half was up and Inter emerged for the second half with renewed vigour.

Kovacic buried the ball in the back of the net with a superb overhead kick within two minutes of the restart, but it was not long before the home side were back on terms.

Mauro Icardi lost his man on the right wing and whipped in a cross to Palacio, who tucked the ball in at the near post, although goalkeeper Nicola Leali should have done better.

Podolski – a half-time replacement for Kuzmanovic – rattled the left-hand post with a rifled shot from 20 yards out soon after, before Carbonero had claims for a penalty turned down at the other end when he appeared to be upended by Andrea Ranocchia.

The pair went nose to nose in the aftermath and Carbonero might count himself lucky to have avoided a red card for thrusting his head into Inter skipper Ranocchia's head.

Icardi flashed a strike across goal before time was up, but Inter's quest for a winner fell short as they made it four matches in a row without win.