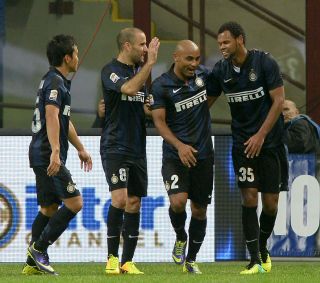 The Milan outfit suffered two defeats to Atalanta last season, including a thrilling 4-3 reverse at San Siro in April, and drew both meetings in the 2011-12 campaign.

Their last success came in a 3-1 home win more than three years ago, with goals from Diego Milito, Sulley Muntari and Christian Chivu securing the points on that occasion.

Inter go into Tuesday's game at the Stadio Atleti Azzurri d'Italia on the back of a 4-2 home victory over Verona.

That triumph ended a run of three Serie A matches without a win for Walter Mazzarri's side, and left them fourth with 18 points from nine games.

Mazzarri is looking forward to the challenge Atalanta will pose and is happy with the way his team have responded since he took over as manager in the close-season.

"It is another test for us to see how far we've come," he said. "The next two games (against Atalanta and Udinese) will tell us a lot about where we are going.

"I'm delighted with the way the lads have taken everything on board. I look not just at the results but how we play and I'm happy."

Ishak Belfodil is absent through suspension for Inter following his sending-off after the final whistle against Verona.

Atalanta have struggled for consistency so far in Serie A, but occupy a respectable position of ninth with 12 points to their name.

Colantuono will hope for a strong reaction after his side fell to a 1-0 defeat away at Sampdoria on Saturday, ending a run of three consecutive victories in Serie A.

Striker German Denis will look to provide the attacking impetus for Atalanta, the 32-year-old having notched four league goals so far this season.

Giacomo Bonaventura and Stefano Lucchini (both thigh) remain sidelined for the hosts.