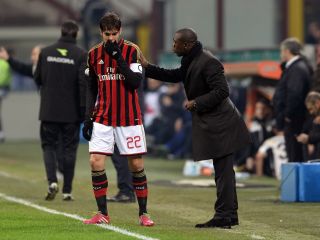 New Milan coach Clarence Seedorf claimed a home victory over Verona in his first match in charge last week, and the San Siro giants - who are languishing in 11th place in the table - visit Sardinia looking to record consecutive top-flight wins for the first time since May last year.

Cagliari are in turmoil off the pitch, with owner Massimo Cellino indicating that more players, such as highly-rated defender Davide Astori, could follow Radja Nainggolan out of their temporary home the Stadio Sant'Elia after their star midfielder joined Roma earlier this month.

Ivo Pulga's 14th-placed side have gone five Serie A matches without a win, but victory over the inconsistent Milan - who lost 2-1 at home to Udinese in the Coppa Italia last eight on Wednesday - would move them to within a point of their opponents.

However, Cagliari have not beaten Milan in their last 22 matches in all competitions - a run that stretches all the way back to October 1998.

Seedorf will not have West Ham target Antonio Nocerino in his squad, and Iganzio Abate is the latest Milan player to be struck down with flu.

He joins Valter Birsa, Bryan Cristante, Cristian Zaccardo, Andrea Poli, Christian Abbiati and Gabriel with the illness and, although some of that group may be fit enough to participate, Marco Amelia (knee), Matias Silvestre (calf) and Cristian Zapata (hamstring) are definitely missing.

The hosts have new Brazilian signing Adryan available and will hope the youngster can spark them into life despite lacking match fitness following his move from Flamengo.