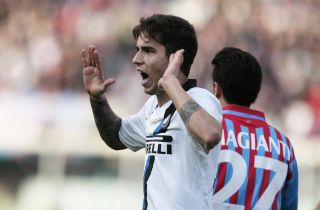 Walter Mazzarri's men were 2-0 winners over Genoa in their Serie A opener on Sunday thanks to goals from Yuto Nagatomo and Rodrigo Palacio, having already beaten Cittadella in the Coppa Italia the week before.

After finishing ninth in Serie A last season under Andrea Stramaccioni, Inter have made a much more positive start to their league campaign this time around.

While they may have improved at the back, Inter also have the in-form Palacio to call on, with the Argentinean having scored three times in their two games this campaign.

"We have an organised team and that's the foundation for positive results," he told Inter's official website.

"Our opponents can also cause us problems but we always need to give our all.

"Now we're off to play Catania, a great team, who always perform well, particularly at home, and they showed that last season. We'll need to play well."

Catania lost their opening day fixture in Serie A, 2-1 to Fiorentina, but will hope a return to home comforts can give them a lift.

They have lost just one Serie A match at home this year, to Inter, in March. Palacio scored twice on that occasion as Inter came from 2-0 down at half-time to win 3-2.

Catania finished a place higher than Inter last season though and Argentina international Campagnaro believes Pablo Barrientos - who scored in the defeat to Fiorentina - and fellow countryman Gonzalo Bergessio will pose the biggest threats to his side's positive start to the season.

"It will be a great footballing battle," he continued.

"Bergessio is someone who never lets up, he chases every ball and is always a threat. Then there are other talented players like Barrientos who always makes good runs from deep."