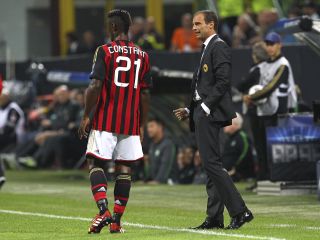 Although Milan have yet to win in four league games on their travels this season, they boast a superb record against Parma, having lost just one of the last 18 meetings between the two sides.

Parma's only victory over Milan in the last 10 years came in March 2010, when a late goal from Valery Bojinov secured a 1-0 win at the Stadio Ennio Tardini.

However, Roberto Donadoni's men will be buoyed by victories in each of their last two home games, against Atalanta and Sassuolo.

Parma currently sit 13th in the table, but were unbeaten in four prior to a 3-2 reverse at Hellas Verona last time out.

Milan's last action came in the UEFA Champions League as they held Spanish giants Barcelona to a 1-1 draw at San Siro.

Massimiliano Allegri's men have yet to lose in Europe's premier club competition, but their league form has been patchy and they already trail leaders Roma by 13 points.

Mattia de Sciglio has returned to training, though, and could make his return from a knee problem, while Brazilian goalkeeper Gabriel will hope to make a second appearance after a fine debut against Udinese last weekend in the absence of Christian Abbiati, whose fitness remains in doubt.

Daniele Galloppa and Gabriel Paletta are still on the sidelines for Parma, but Antonio Mirante is available again following a ban.

On-loan Napoli midfielder Walter Gargano, who spent last year with Inter, told Parma Channel of his respect for Milan ahead of the fixture.

"It is a great team, with high-quality players, that holds the level of the best teams in the world as we saw on Tuesday (against Barcelona)," said the Uruguay international.

"It will need the best Parma to make a result. We need to stay close, play as a team. If we do this we will take home something."