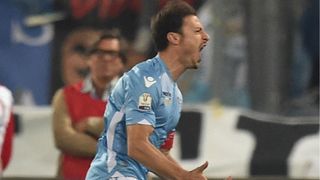 Lazio could be without captain Stefan Radu for next week's blockbuster showdown against Roma in the Serie A's Derby della Capitale.

Stefano Pioli's Lazio - third in the standings - will face second-placed Roma at Stadio Olimpico in Serie A action on Monday and are sweating on Radu's fitness.

Radu failed to see out the match as Lazio were overhauled 2-1 by Juventus after extra time in the Coppa Italia final on Wednesday.

After opening the scoring, Radu hobbled off with a muscular problem in the 70th minute in the Italian capital.

The Romanian midfielder is now doubtful for the Rome derby, which pits second against third, and will almost surely decide who claims a UEFA Champions League group stage spot.

"For the moment I don't feel great, but hopefully tomorrow the test results will be positive," Radu told Rai Sport.

"We will certainly do everything for me to be ready against Roma on Monday, but we cannot say for sure yet."

Despite their Coppa Italia heartbreak, Radu insists Lazio head into the fixture full of confidence, adding: "[The] performance gives us so much confidence for the derby and, certainly, we will do even more to win."

Lazio and Roma met in January, playing out a 2-2 draw after the latter erased a two-goal deficit.

It is party time for Juventus, who are on track for the treble, as they prepare to host Napoli on Saturday.

Juve's Coppa Italia triumph - their 10th - secured the club's second trophy of the season, having cantered to Serie A glory.

Genoa versus Inter is the only other match scheduled on Saturday, and it could determine the destination of the final UEFA Europa League place.

Usually the top five positions guarantee European football but after champions Juventus and Lazio contested the Coppa Italia final, the Europa League spot was passed down one position, meaning Genoa are in the box seat to compete in UEFA's second-tier tournament next season.

Genoa are four points clear of eighth-placed Inter, while Sampdoria - who travel to lowly Empoli on Sunday - are only two points off the pace.

On Sunday, fifth-placed Fiorentina can make it four wins on the bounce with victory at Palermo.