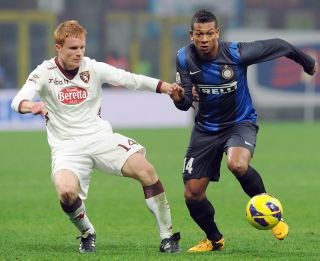 Walter Mazzarri's men have taken just one point from their last two games and have fallen away from the top three in Serie A as a result.

But Inter should approach the game with confidence as they aim to continue their magnificent record against the Turin club.

Inter eased to a 2-0 win in last season's fixture at the Stadio Olimpico, although Torino did earn a 2-2 draw at San Siro.

Argentine attacker Rodrigo Palacio leads the way for Inter in the goalscoring charts with three, and he will be expected to add to that tally against a team without a win in their last three matches.

Ricky Alvarez should also be at the forefront of the Inter attack, but defenders Cristian Chivu (foot) and Javier Zanetti (Achilles) are both still on the sidelines.

Torino have a host of absentees as they look to end their long wait for a victory against the 18-time champions.

Omar El Kaddouri and Migjen Basha also miss out for Giampiero Ventura's side, who will look to Alessio Cerci to continue his fine form in front of goal.

The hosts have kept just one clean sheet this season, though, and Venturi's men will need to remedy their defensive issues if they are to replicate that victory.