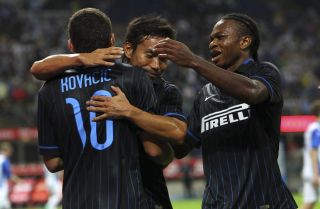 While only three points separated fifth-placed Inter and surprise packets Torino last season, Walter Mazzarri's men boast a significant edge, having not lost to the Turin-based outfit in 20 matches.

Inter have won 14 games and drawn six during that period, with their last defeat to Torino coming in the form of a 2-0 loss in February 1994.

And Inter make the trip to the Stadio Olimpico di Torino full of confidence following their 6-0 rout of Iceland's Stjarnan in the UEFA Europa League play-offs on Thursday.

"The lads deserve to be congratulated after that," Mazzarri said.

"As I said, I'm so happy for Kovacic. Icardi did well when he came on too, while Hernanes was excellent and the defenders put in a good shift.

"We're defending well. We've only had one bad 45 minutes this summer, in Frankfurt. We conceded some bad goals up there, but it was down to the heavy workload."

Torino have been just as impressive defensively en route to qualifying for the Europa League group stages.

Thursday's 1-0 win over Croatian side RNK Split capped a remarkable turnaround for Torino, who were promoted from Serie B in 2011-12.

Two years on and Torino are now expected to challenge for one of the European spots yet again this season.

"If we look back to three years ago, it's remarkable to see Torino enter Europe through the main door," Torino coach Giampiero Ventura told Sport Mediaset on Thursday.

"It is satisfying for everyone: the fans, the city that rushed to the stadium tonight and will continue to do so.

"We brought back the desire to cheer on the team, the pride in these colours. After so many games, it is also very satisfying for my players."

Torino will have their work cut out against Inter, having lost top goalscorer Ciro Immobile to German giants Borussia Dortmund during the off-season, while Italy international Alessio Cerci has requested to leave.

Though, they have brought in players such as experienced striker Fabio Quagliarella and Antonio Nocerino.