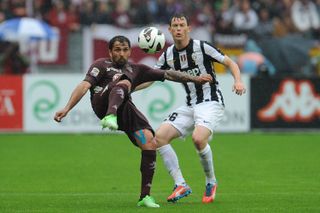 Antonio Conte's side have won four of their opening five Serie A matches, dropping just two points in a 1-1 draw away to Inter on September 14.

Their latest triumph came on Wednesday as the Turin outfit came from behind to defeat Chievo 2-1.

Cyril Thereau put the underdogs into a first-half lead, but Juventus came back in the second half thanks to Fabio Quagliarella and an own-goal by Alessandro Bernardini.

Torino have made a solid enough start to their campaign with just one loss, and are sure to provide stern opposition in a hotly-contested fixture.

Alessio Cerci could be crucial to any success Torino have, the forward has notched five goals in the league thus far.

Rudi Garcia's charges beat Sampdoria 2-0 on Wednesday to record five straight wins at the start of a Serie A campaign for the first time in their history, and will hope to extend that run when they play host to Bologna at the Stadio Olimpico.

The table toppers come up against a Bologna side that have failed fail to register a league victory, but with three draws from five games could cause an upset.

Sassuolo head into their fixture with Lazio, buoyed by their first point of the season in an unlikely 1-1 draw away to Napoli at the Stadio San Paolo on Wednesday.

Walter Mazzarri prepares his revitalised Inter side for a difficult trip to the Stadio Nereo Rocco for an encounter with Cagliari.

Inter have won three and lost one of their four fixtures, after struggling to a ninth-place finish in Serie A last season.

But this year has seen a return to the sort of form that saw them secure the treble in 2010. A 7-0 thrashing of Sassuolo on Sunday certainly boosted the side's confidence.

On Saturday, Rafael Benitez will look to get his Napoli side back to winning ways in their away fixture with Genoa.

The Naples outfit would have made it five wins from as many games had they beaten Sassuolo.

Also on Saturday, Milan go head-to-head with Sampdoria at San Siro, while on Monday Fiorentina welcome Parma to the Stadio Artemio Franchi.